Home AGRICULTURE Sustainable Agriculture | Why We Need To Be Aware ?

let’s go back to the beginning ecological farming, Everything we used to put in our fields did not disturb the ecology but nowadays people have started using man-made chemicals which causes the environment to get poisoned and everybody’s health is at risk including yours.

It’s because of three dangers that threaten our food security i.e.

Fertilizers are one of the most important tools when it comes to the disposal of any successful gardener, almost each and every soil is rich in some nutrients and deprived of others, using a fertilizer can supplement the nutrients that your soil needs and increase the chances of successful growth.

synthetic or inorganic. Understanding the differences between each type is essential to know which one is right for your gardening.

Some of the synthetic compounds used to manufacture chemical fertilizers can have harmful environmental effects when allowed to runoff into water bodies.

We all know how important earthworms and other microorganisms are for the soil fertility, this mix of creatures is called soil biodiversity.

They keep our soil healthy when farmers use chemical fertilizers they kill the soil biodiversity though these fertilizers provide food for the plants, they are artificially produced and are unhealthy for them.

The chemical fertilizers also percolate and mix with the groundwater when people drink this it adversely affects their health and causes illnesses like cancer.

Along with chemical fertilizer, farmers are also sold chemical pesticides these pesticides not only kill the specific pests but also many friendly soil biodiversity organisms. 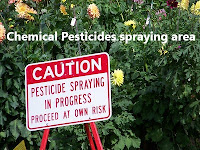 The toxic chemicals in these pesticides are designed to deliberately released into the environment. Though each pesticide is supposed to kill a particular pest, a really large percentage of pesticides reach a destination aside from their target. Instead, they enter the air, water, sediments, and even found in our food.

The use of these also decreases the general biodiversity in the soil. If there are no chemicals in the soil then there is higher soil biodiversity, and this allows for higher water retention, which is necessary for plants to grow.

These are created by taking genes from one creature and inserting them into a plant.
for example:- the gene from a bacteria that produces toxins is inserted into the genes of normal brinjal, now the brinjal is genetically modified and starts producing its own toxins, these toxins make the brinjal a pesticide factory, resistant to one kind of pest. 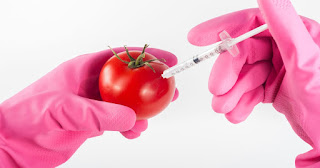 Genetically Modified Crops
If GM crops cross-pollinate with a non-modified plant they can contaminate them as well the genes of GM crops if released into the fields can destroy all-natural varieties of crops.

The GM crops producing companies engineer the seeds in a way that the crops don’t produce another batch of usable seeds, thus the farmer has to buy seeds from these companies every time.

every season this way the farmer gets stuck into a vicious cycle these companies also sell chemical pesticides.

Many farmers don’t realize but these giant Agritech industries like Monsanto, Bayer, DuPont, Syngenta, and their Indian cronies like Mahyco are making a profit at their cost.

Toxic farming produces toxic food as the farmer uses more fertilizers and pesticides the amount of money he spends also increases, forcing him to take a loan from the bank, and eventually he is unable to repay these loans.

This lands him into a debt trap(situations in which a debt is impossible or difficult to repay), responsible for an increase in farmer suicides.

If only they followed ecological farming practices than our traditional farmers will be so happy instead of buying products from our money-hungry corporations.
They follow natural and scientific methods to ensure that their fields are healthy.

The good news is that India already has many farmers practicing methods of ecological farming which helps in conserving soil biodiversity, by working with nature rather than using toxic products which are very much harmful in the long run.

Agricultural Implements: Get 40-50% Subsidy By Govt. of India

A Guide To DBT (Direct Benefit Transfers) Challenges and Solutions