Home ACADEMIC A1 vs A2 milk: The Winner Revealed 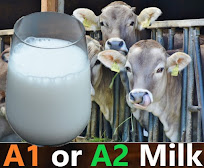 For that, I would like to show you some researchers reports and views from some prominent

personalities who are aware of this subject, and what is the statement of our prime minister about A1 vs A2 milk.

At present two types of cow milk available in the market i.e A1 and A2 milk which is produced by A1 and A2 variety cows respectively.
The majority of cows being raised in India and all other parts of the world are mainly A1 variety.
while the A2 cows are commonly seen in the East African region, some earlier breeds like Desi Indian cows. produces A2 milk which is least common and used in very less amount

About cow’s milk, approximately 82% of milk protein is casein, but the A2 milk has some extra amino acid along with the protein called proline.

Its is an opioid peptide in A1 beta-casein is produced. Absorption of the BCM 7 into the bloodstream leads to a high incidence of  schizophrenia, autism,  and some other neurological disorders (Under research)

The proline is strongly bounded to a small protein called BCM 7, which prevents it from getting into the milk produced by A2 cows.

On the other hand, the Histidine (A1 Cows) holds a weaker bond with BCM 7, so it easily released in the GI tract of animals and can enter the human body on the consumption of human milk from AI cows and interact with the digestive system and some other internal organs.

It is also seen that A2 milk is helpful for Lactose intolerant persons.
A2 beta-casein protein found in milk produced by ‘old-fashioned’ cows like Charolais, Jersey, Guernsey, and limousine.

Here are some reports from the US national library of medicine,

Claims About A1 milk National Centre for Biotechnology Information (NCBI)

Type 1 diabetes is typically diagnosed in children and characterized by a lack of insulin.

However, these studies are observational. They cannot prove A1 beta-casein causes type 1 diabetes, they were only that those who are getting more of it are slightly at a higher risk.

While there are some animal studies have found with zero difference between A1 and A2 beta-casein, while others show A1 beta-casein to have an either protective or adverse effect on type 1 diabetes (Source5, Source6, Source7, Source8).

So far, their no clinical trials in humans bodies that investigated the effect of A1 beta-casein on type 1 diabetes.

Autism is a mental condition characterized by poor social interaction and repetitive behavior.

In theory, peptides like BCM-7 might play a task within the development of autism. However, studies do not support all of the proposed mechanisms (Source9,  Source10, Source11).

One study in infants found higher levels of BCM-7 in those fed cow’s milk compared to those that were breastfed. Notably, levels of BCM-7 dropped quickly in a number of infants while remaining high in others.

For those who retained these high levels, BCM-7 was strongly associated with an impaired ability to plan and perform actions (Source12).

Another study indicates that drinking cow’s milk may worsen behavioral symptoms in children with autism. But other studies found no effects on behavior (Source13, Source14, Source15).

So far, no human trials have specifically investigated the consequences of A1 and A2 milk on autism symptoms.

Lactose intolerance is the inability to completely digest lactose (lactose). This is a common cause of bloating, gas, and diarrhea.

The amount of lactose in A1 and A2 milk is almost the same. Some people think that A2 milk causes less bloating than A1 milk. 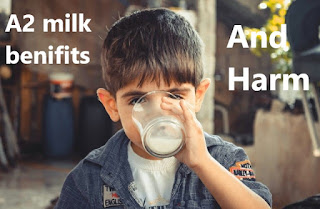 In fact, studies indicate that milk components aside from lactose may cause digestive discomfort (Source16, Source17).

Scientists have suggested that certain milk proteins could also be liable for some people’s lactose intolerance.

A study in 41 people showed that A1 milk causes softer stools as compared to A2 milk in some individuals, while another study about Chinese adults found that the A2 milk which led to significantly less digestive discomfort just after meals (Source18, Source19).

Additionally, animal and human studies suggest that A1 beta-casein may increase inflammation in the digestive system(Source20, Source21, Source22).

Some Researches And Reports

The A2 Milk Company (New Zealand)

The company claims that the Milk containing A1 protein is harmful but the European Food Safety Authority (EFSA) in 2009 found that there was insufficient evidence to prove that the bioactive peptides in A1 milk do have a negative effect on health.

Until operation flood in the 1970s when India’s population gradually increasing and then government initiated this program Indians mostly dependent on A2 cows and most of the milk in India was A2 milk. Most of the A2 cows that are being preserved here is because of the traditional and cultural beliefs. The white revolution was to promote cross-breeding with European cows and to import foreign hybrid breeds for the higher yield in order to meet the national milk requirement.

The operation flood launched in the year 1970, the project of India’s national dairy development board (NDDB), and the worlds biggest dairy development program, the quantity of desi cow breeds was not sufficient to fulfill the country requirement, so we started importing the semen of foreign breed cows and started Mix breeding that leads to decrease in population of desi cows and today there is complete dominance of A1 cows in India.

Because it is the issue of billions of people around the globe, So all the countries should take part in the research that is A1 milk is harmful and bad for us in long term or A2 milk is better for our health.

The shortage of proof that switching to A2 milk intake can make an enormous impact on health and wellness has made it impossible to boycott the sales, use, and continuous milk production and dairy products from the A1 cow breeds.

Even if there’s solid evidence on the advantages of A2 milk and therefore the detrimental effects of A1 milk intake, it’ll take years, even decades, to adapt to the raising of pure A2 cow breeds and manufacturing of A2 milk.

Who Else Wants to make career After BSc Agriculture?

Who Else Wants to make career After BSc Agriculture?